A plantar plate tear is a common strain or tear of the strong ligament under the metatarsophalangeal joint of the foot. The symptoms are typically just over and just distal to the joint on palpation (see the typical spot illustrated in the diagram below):

A strange symptom that some with this describe is that it can feel like a sock is crunched up under the area, but when they check the sock is not like that at all. The cause of a plantar plate tear is not entirely clear, but it is an overuse problem.

Fixing a plantar plate tear is not difficult, but it can take a long time. The best approach is to use strapping to hold the toe plantarflexed. The tape needs to be used for up to 6 or so months of it to heal. A rocker sole shoe and also help restrict movement at the joint and also help. If this conservative approach does not help, then surgery to repair the tear is often indicated

Chilblains are a common problem in the colder climates, so are a seasonal problem.

Chilblains are a vasospastic reaction of the microcirculation to changes in temperature when the feet become cold. They start out a reddish coloured itchy lesions that turn a darkish blue cyanotic color if they become chronic

Do they work? That question gets asked a lot in various forums (see here and here). There is no clear answers if they really do help pr not. Some anecdotal claims are that they do help and some are that they do not help. The published research only shows a small change in the angle of the toe that may not be sustained in the longer term.

There is a lot of marketing hype around them. They will not make bunions go away. At best they appear to improve the angle of the big toe a little, but needs to be worn every night for a month or so to get that small improvement. There is no harm in trying the bunion correctors, as that small improvement may make quite a difference to the symptoms.

In Australia “thongs” are what the rest of the world call “flip flops”. These types of footwear are an important part of the lifestyle there. The Archies Thongs are flip flops that have an arch built into them, so they are proving popular as an alternative and as an adjunct to foot orthotic therapy.

The amount of support that they have is roughly the same as a pre-fabricated foot orthotic, so there is no reason why they can not be used as an alternative to foot orthotics when indicated. The Archies Thongs come in multiple colours and multiples sizes.

The abductory twist is an observation made during a gait analysis in which there is a sudden abduction as the heel leaves the ground when walking:

The Short Foot Exercise is something that is often promoted as a cure all for so many foot ailments. Its not. It is a useful tool.

The exercise is best described in this video:

The exercise is useful for what it is designed for: to strengthen the intrinsic muscles in the foot. That is all. Nothing more and nothing less. It does not cure all the ails the foot, despite the claims by many of it supporters. It supposed to “cure” “overpronation” – it dosen’t. The evidence is clear on that. I can be useful in plantar fasciitis. 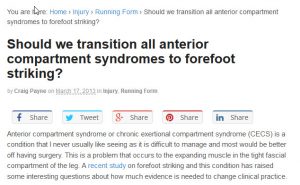 Grounding or earthing is junk science from the the alternative health movement that is based on the absurd belief that we need to be barefoot in contact with the earth to keep our ‘electrons’ in balance. If our ‘electrons’ are out of balance, then you get a whole range of health problems. If you can’t go barefoot on the earth, then sellers have some products to sell to help facilitate that grounding. Those that promote the concept have a financial interest in the concept! 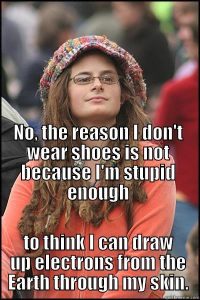 The whole concept is biologically and physically impossible. The way that claims are made break some basic laws of physics. It is made up quackery and woo. The claims are bogus. For example you see claims that ‘electrons’ from the earth are better than the one in our own bodies! Electrons are electrons! They are the same wherever they are.

The research it is based on is biased and bogus.